Here in Sweden the final in the national league consist of a seven game series.
I.E. The team that win four games becomes Swedish champions.

This year the final teams was Växjö and Skellefteå.
After the first five games was played Växjö had the lead with 3-2 in games.
Which meant that game #6 could either end up being the "deciding" final or that there would be one more game played to promote a champion.

If a game becomes the "deciding" game, and a team becomes national champions. Pretty everything is about the pictures after the game. With the gold medals, the trophy and the joy off the winning team.
The other options means that you need to have the right pictures from the game itself. 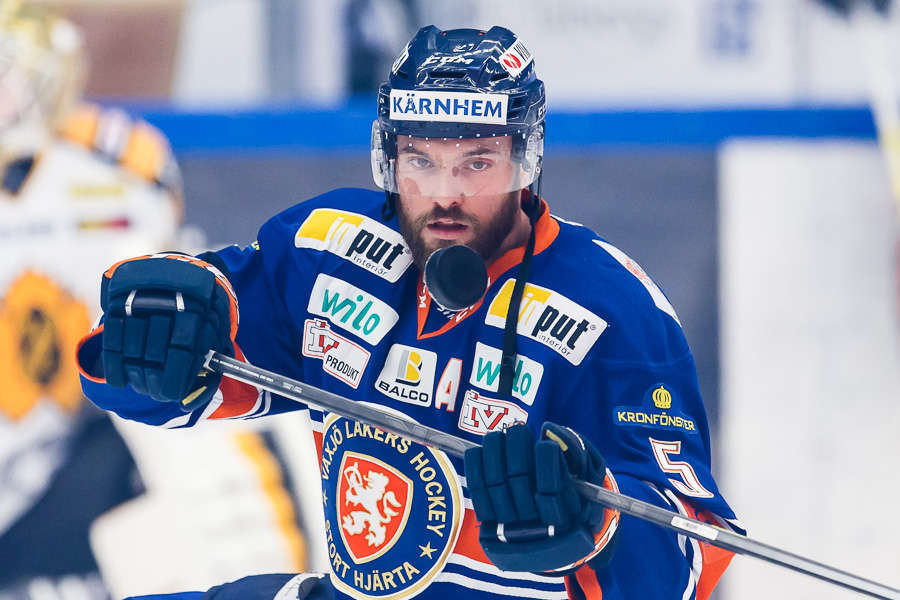 After the first two periods Skellefteå had the lead with 0-2.
So i started to work with focus on the game pictures.
In the third period Växjö scored two goals.
Meaning i had to "calculate" with two scenarios.

On top of this i had a lot of competition.
First of all i had six competing photographers from other agencies.
And two of the major Swedish newspapers, (Aftonbladet & Expressen), had their own photographers there.

This meant that i had to be "on top" doing my very best. 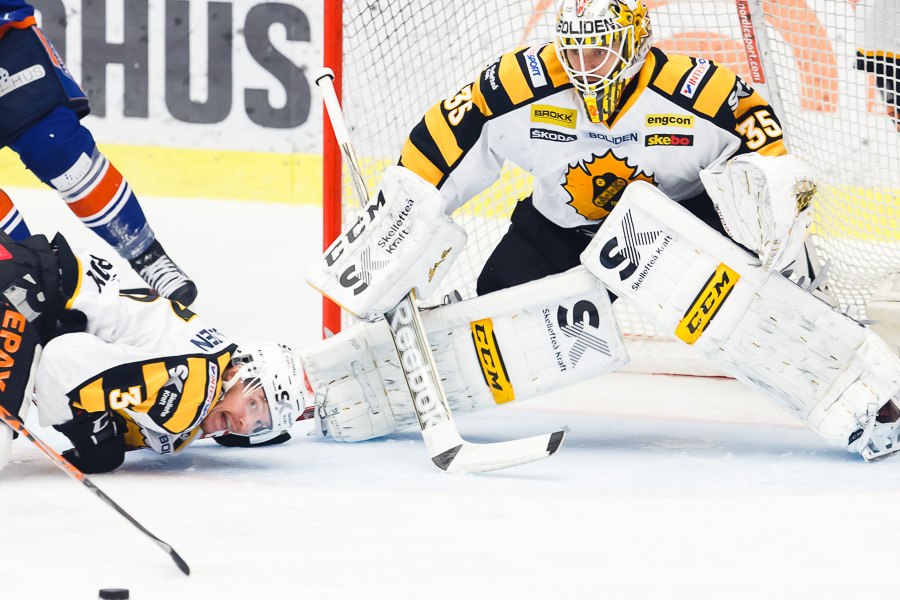 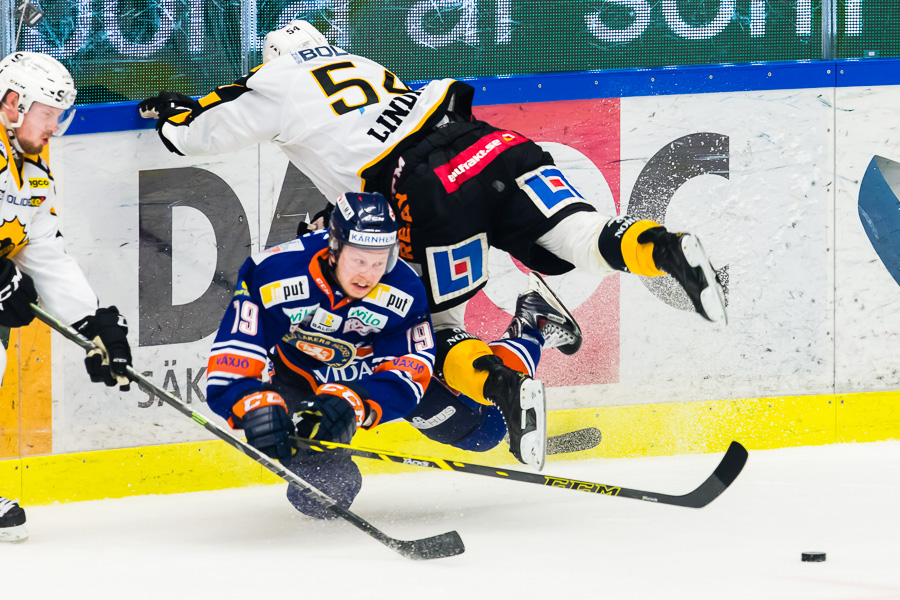 When a game gets "tied" in the Swedish playoffs. the game will be continue to be played in "sudden death" consisting of full 20 minutes long periods. With full 18 minute long breaks until on of the teams score a goal. 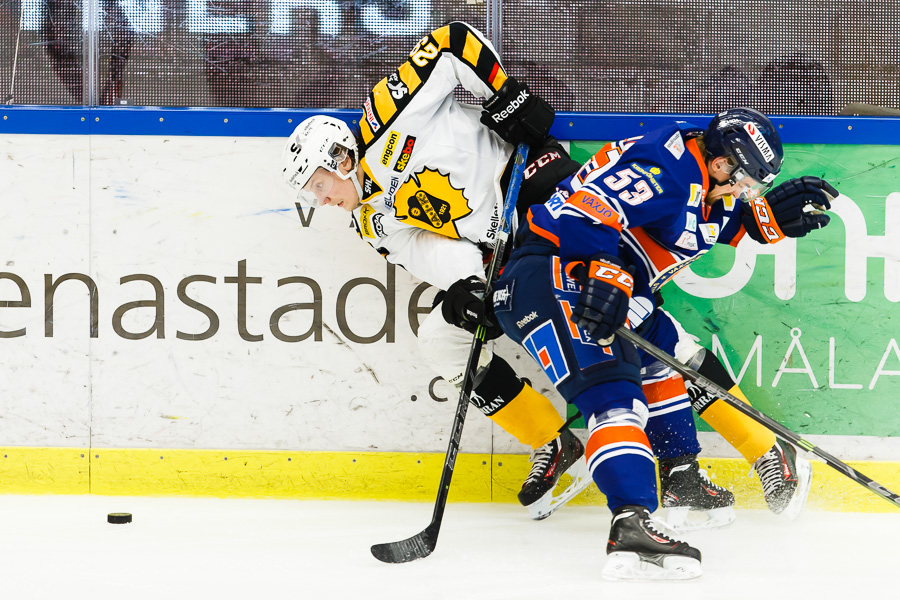 The game ended in the 2nd overtime period. After a total of 90 minutes and 21 second was played, since Tuomas Kiiskinen scored the game winning goal 3-2 and Växjö became Swedish champions.

From earlier experience i now that when a team becomes Swedish champions.
The newspapers like to use images that are big, and like when you can se happy fans in it.

Usually, when a team scores, i would have used a long lens to get a tight image with a lot of the players face in it.

This time, as soon as i saw that the players celebrated their win just in front of their fans.
I decided to zoom out to get something "different". 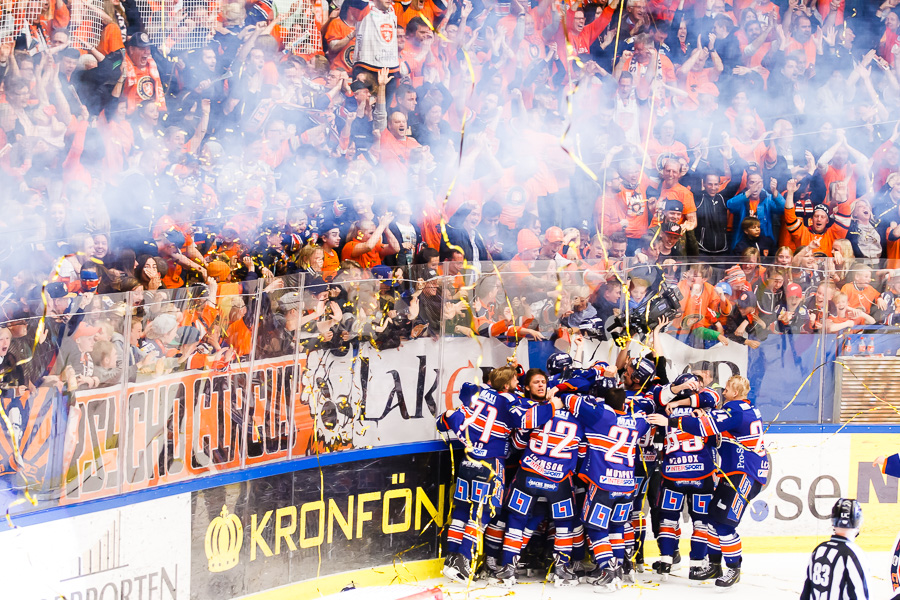 This is how Aftonbladet (a major national Swedish newspaper) used it: 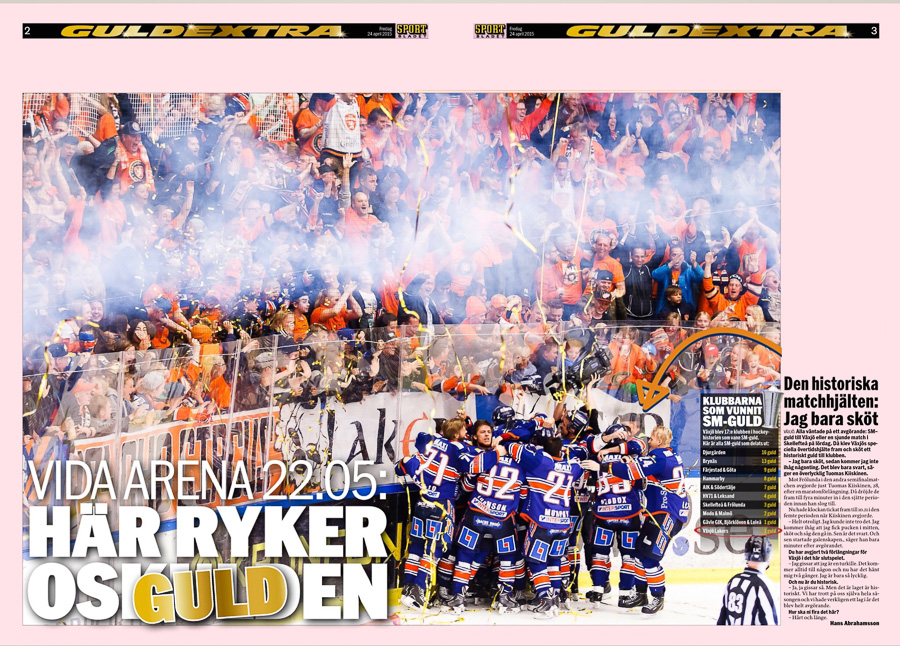 (One of the other major national Swedish newspapers, Expressen used some of my images on ther web. Here and here). 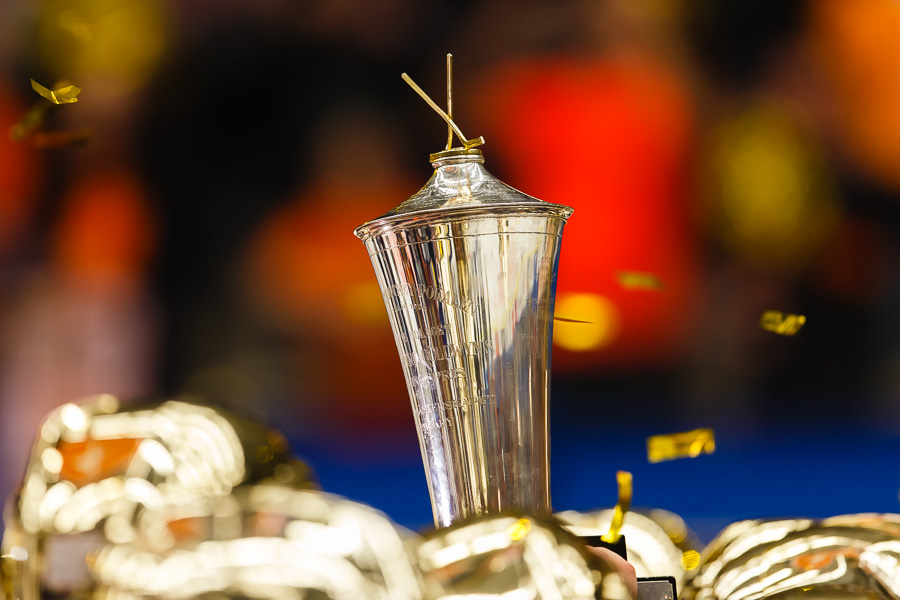 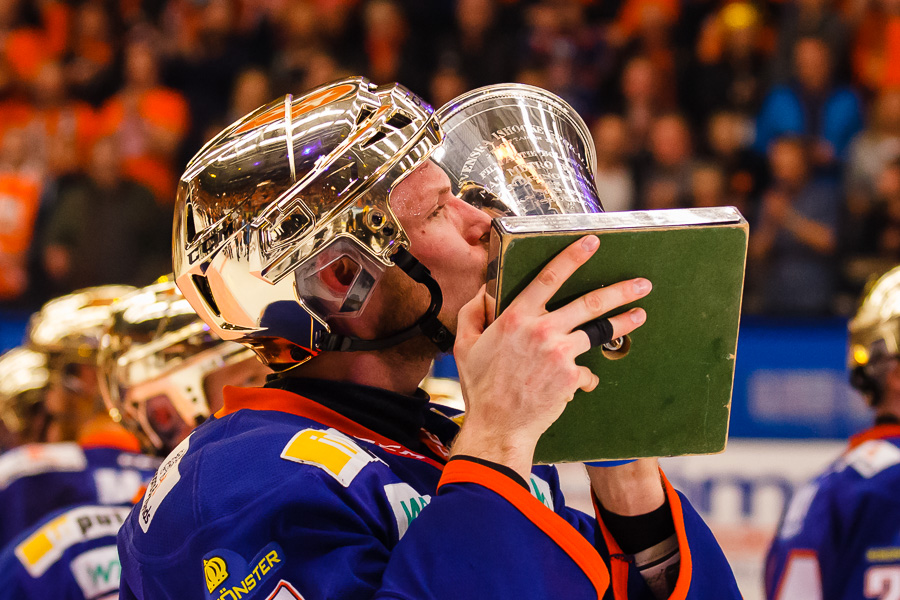 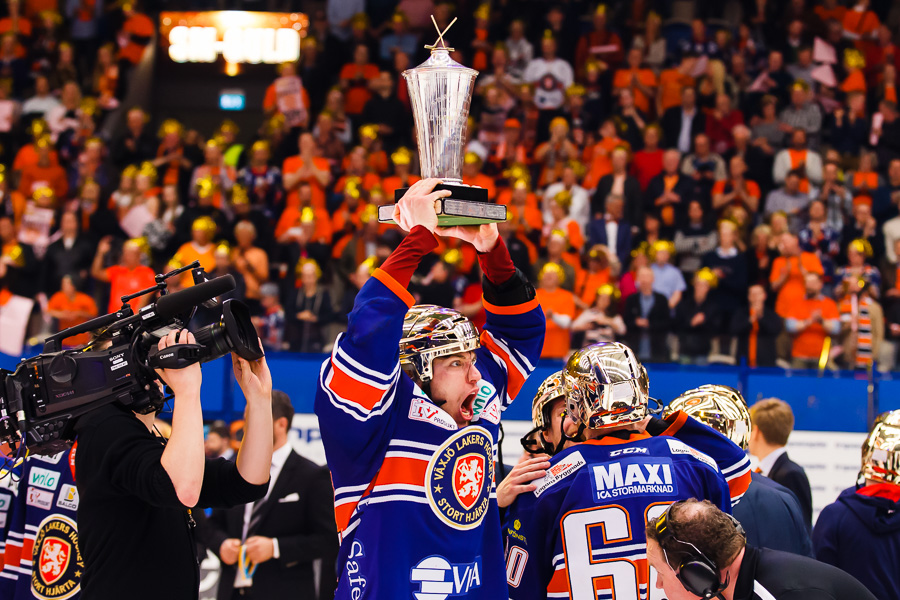 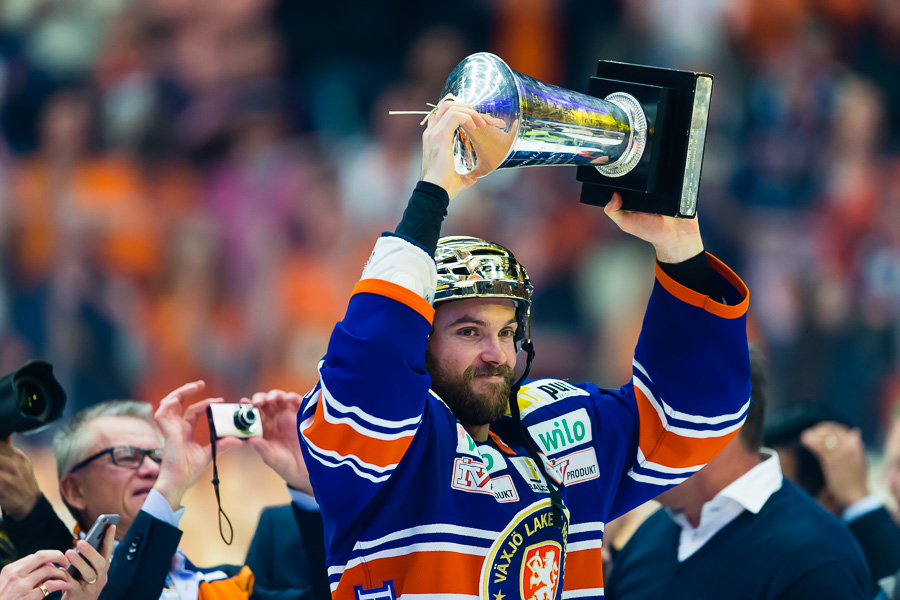 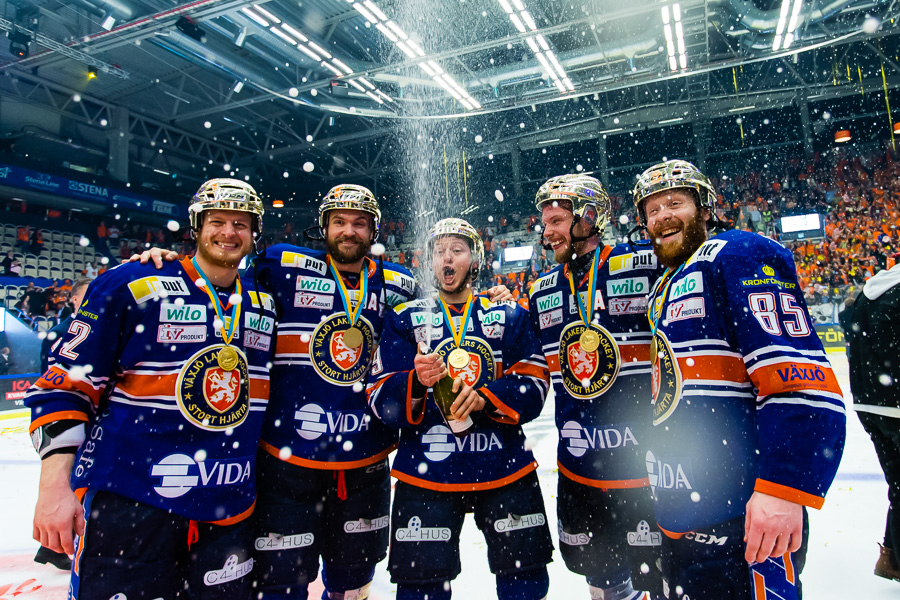